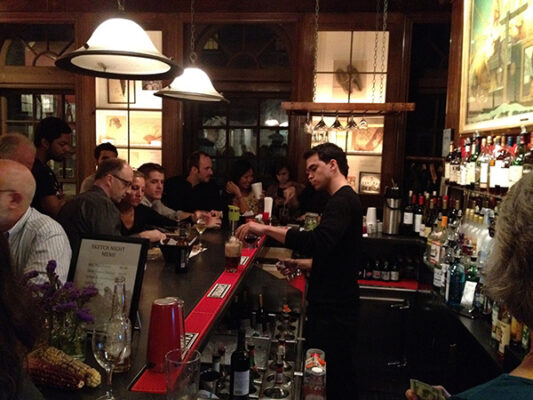 If you are an aspiring illustrator and have not paid a visit to the Society of Illustrators in New York City, I encourage a stop on your next visit to the city. My undergraduate studies in advertising art (as it was called back then) were filled with dreams of creating an illustration for the cover of a national magazine. For an artist, I equate that to being in a movie or TV show. My influences were many at the time. Rockwell, Leyendecker, Holland, English, Mahurin and too many others to name here. Other aspiring illustrators and I would purchase the Society of Illustrators Annual of American Illustration every year ($50.00 at the time) and mull through every style, concept and the medium used on each illustration that made it into the book. We were groupies of the highest order. And why not, we were all doing art in some form or fashion since we could hold a pencil. My first trip to the Society was in the late 80’s. My work had made it into the student show. Years later as a graduate student in New York, I still found The Society of Illustrators to be a magical place.

The set up was a little bit of work. It justified the entrance fee which varies depending on whether you are a member or not. The Society would transform the dining room area upstairs into a platform or stage for the models and place chairs in a semi-circle all around it. In the front near the upstairs entrance of the room was an open bar. To the left was a jazz band that I heard was made of members of the Society that can play a little. They were very good. Now, the mood was set. I found a spot in the corner area of the stage to set up. The participants were of all ages. Students, men, women, professional artists or just people wanting to have a good time drawing. This day was a little crowded, so it was best to get drinks before the first session began.

This particular night was the African Warrior and African Queen as far as I could tell.  The man had dreadlocks. I couldn’t place the period or wardrobe, they were dressed more like Apache Indians but no matter we were ready to draw. In drawing sessions, it is all about enjoying the challenges of timed poses and for some of us, to see if we still got it — whatever IT is. There was also a little unspoken silent competition in the works I’m sure. It was not just a competition to determine the best sketch artists, but also who might be carrying in a unique style into the mix. I saw artists with paint, color pastels, and ink pens. This was going to be good. 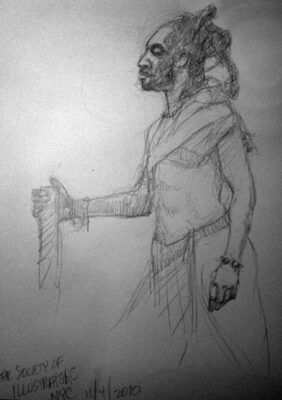 The timed sessions were done not just for a challenge, but also to get the models moving and artist warmed up for the final 30-minute pose. The sessions seemed really fast. I started drawing as if I had all day to finish. I would do a base gestural drawing and start with details only to hear time called. There was no finishing later. The models went into a new pose. If there was ever a time I felt nearly inadequate as an artist was that night. Walking around during breaks gave us an opportunity to see what everyone was creating. There was cubism, watercolor, beautiful pastels and stuff that any gallery owner would be proud to display. All of this was done in timed poses that range from 5 to 15 minutes. It was some of the most wonderful displays of craft I have ever seen in one room. It was in the later sessions though, that I started to get my mojo.

Finally, when it was all over, I felt good about how my sketches ended up. I came in with a 16 x 20 pad of newsprint and some pencils I had purchased from an office supply store on the way there. I left with something I would keep — decent sketches and a wonderful experience. I continued to go to sketch night during the three years in graduate school in New York City.

Since that time, almost ten years ago,  I have done the SI sketch night several times and even once with my now adult daughter. I hope to do it again someday as my daughter and I seemed to have a love for the city and its many cultural offerings. It’s funny that my career path didn’t quite go the way I planned as a full time illustrator (that’s another story). I seemed to also have a knack for advertising and design which is what I do to this day. However, I still find time to paint and draw and even been in a few juried shows. As I continue in the visual communications industry, I will always painting, drawing and now printmaking as my passion.

S. Christopher James is an award-winning designer, illustrator, and artist with over 25 years of experience in the field of advertising, design, and the arts. He lectures at the University of Texas at Arlington and earned his MFA in visual communications from Marywood University in Scranton PA.